Deerfield Beach is like Bakersfield in the middle of the tropics: trailer parks bordering clear warm water; the air at dawn brilliant and pink and filled with cigarette smoke. I like to swim out far from shore and float under the sun and the thunderheads, fish weaving through my legs, salt in my mouth and hair. It’s my favorite kind of ocean – where you can float and the waves never get strong enough to push you over. 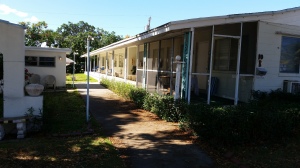 Deer used to roam around the river that borders this city. Seminole Indians lived inland. Now it’s all washed out colors, peeling paint, Budweiser, overflowing ashtrays on plastic tables between lounge chairs. There are a couple of luxury places right on the beach, but one block back it’s overweight families and sagging fences and pastel stucco and rent-by-the-week.

The pool at our hotel is a standard rectangle, seven feet in the deep end. It borders the parking lot which is on the street so you can hear every overpowered motorcycle and giant truck blasting music as they pass on A1A. Fragments of country songs filter through when you come up for air. The water is murky, a chemical reaction of chlorine and human detritus. It’s warm like bath water.

There are two old plastic tube water slides. The yellow one is out of order, warped at the bottom so the sections do not meet seamlessly. The blue one is fun but you end up with a bruised elbow because it’s fast and bumpy. The pool bar is a square cut out of the building near the slides. The bartender, “Johnny Cocktail,” hung up a guitar and some colored lights to make it more cheerful. There are always a couple women in tube tops and high heeled sandals sitting there drinking mixed drinks out of plastic cups. One of Johnny’s regulars is an employee from the Subway/Haagen-Dazs next to the hotel. She has fuchsia hair and one of those mouths that is always open and slack in its relaxed state.

“Sometimes after a day at work you just have to have a drink,” she told me. I wanted to tell her that there was a hair in my BLT the night before. Instead I said “Oh I know,” and watched her exhale a plume of Kool smoke. She had a constellation of acne across one cheek. Later I found out she had a felony for burglary and a three-year-old kid. She is 23.

One day there was a thin woman in a black bikini sunbathing by the deep end. When she got up to jump in the pool and cool off, I noticed her ankle monitor. “Oh that’s total bullshit.” She had confronted the guy who had been stalking her in her own front yard, and the gun was not even loaded. But the neighbors called the cops and now she has to live at the Comfort Inn because she can’t be within a certain distance from where it happened.

Later I saw her in the lobby, frantic and telling the old maintenance guy that she couldn’t get in her room and she needed to be in within the next fifteen minutes or she would be in trouble because of her ankle monitor. She kept pointing at it and saying “fifteen minutes!”

“You can’t open the door?” The guy asked her.

“No, the latch is engaged from the inside, like someone is in there, so my key doesn’t work.”

“Is someone in there?”

A Baptist convention from Haiti was taking place in the “Dolphin Room” with a lot of yelling and clapping.

The best time to swim in the ocean here is early evening. You have to navigate the tangles of seaweed and the silvery fish who nip at your ankles. The waves roll slowly and gently under the darkening sky. It’s strange to watch the day turn to night over the ocean and remember it’s the Atlantic and the sun is setting behind you. The horizon is flat and the colors are just shades of blue and gray fading to black.

Turtles nest here and every hundred yards or so there is a raised triangle of sand roped off with caution tape. “Do not disturb, sea turtle nest.” From March to October, lights are turned off at night on this

stretch of highway and it’s against the law to have bright lights on after dark. The light confuses the baby turtles and makes it harder for them to get back to the water. These mama turtles come back to lay their eggs on the same beach where they were born. They use the earth’s magnetic field to find their way home.

This heat burns and bleaches everything. The sun is more intense. “Even 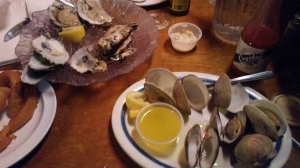 we get burned,” the African American desk clerk told me. The air is thick with humidity and salt air. I ate oysters, clams, crab. On the weekend, the younger crowd came, the $200 bikinis, the useless surfboards.

Our first night we stayed in a little condo / motel with wicker furniture and fading flowery curtains. Everything is fading. In the morning I passed an old couple sitting outside their unit. The woman had her compact close to her face and was applying makeup. The man just sat there in his white tee shirt, observing.

I really loved it. I think I could live there. 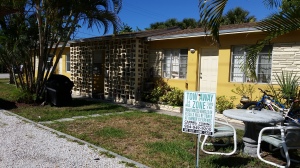 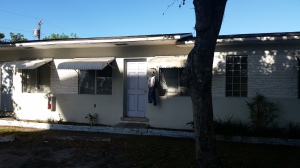