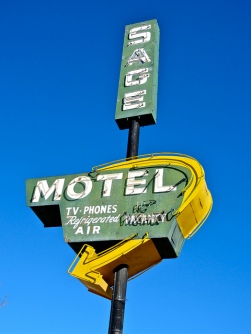 In Farmington, New Mexico, we stayed in a motel that had a pool and a ping-pong table.  One night we went to a high school baseball game and ate in a Pizza Hut while we watched cars cruising the tiny boulevard.  High school kids cruising, talking and yelling to each other with the easy kind of familiarity that exists in small towns.  I wanted to move there to have that experience.  He called them kids.  They were my age.

That night we fought about his wife.  We were drunk.  He had to buy the beers because I was only eighteen.

“Why are you even here with me if you aren’t sure you want to get a divorce?”

“Because I love you.”

“Fuck off,” and I probably threw something.

One night in Bel Air at Anna’s house:  she was having some kind of movie party.  There were a lot of us, drunk.  I was mad.  I never got mad like that when I was sober.  I was mad and wanted to leave.  I started swerving around the living room.  Daniel got up and helped me to the car. He blocked the driver’s side.

Then, and I still don’t know where this anger came from, where it was hiding inside of me, because I don’t think I’ve ever felt it since and am not sure I felt it before, I reached back and slapped him across the face.  I tried to punch him but he caught my arms.  I was loud, it was late on Linda Flora.  Porch lights set well back from the street behind manicured gardens full of succulents and marble paving stones turned on.  No one came out.  They don’t do that in Bel Air I don’t think.  They just put on their lights and call the cops.

I don’t know the progression, but I ended up driving.  I drove down those twisted streets slowly, trying to prove that I was capable of driving in my state.  Daniel wasn’t talking.  When we got to the stop sign at Bellagio and Moraga, I shifted into park and got out of the car and walked to the passenger side.  He slid over and got behind the wheel.

Those days I wanted to feel everything, so if I wasn’t driving I would sit on the windowsill, my upper body outside of the car, hanging on to the roof, telling the driver to go faster so the wind would hit me harder.